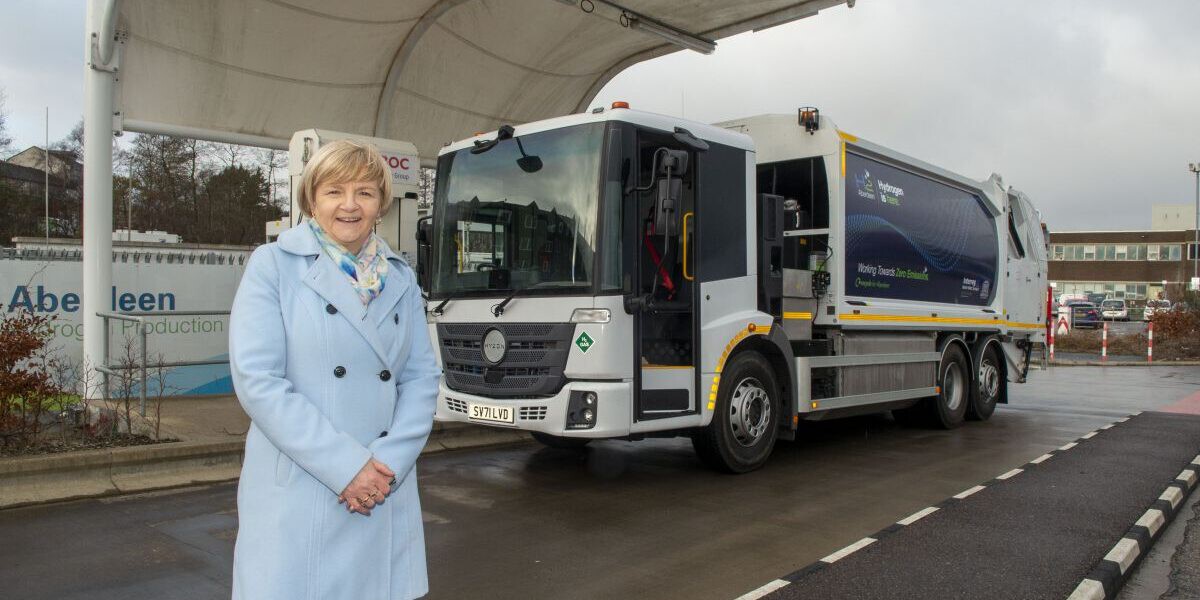 The UK’s first hydrogen-fuelled waste collection vehicle was revealed today in Aberdeen, in a move which continues to accelerate the city’s thriving hydrogen economy. While typical waste trucks are powered by diesel and petrol, the new waste truck will use green hydrogen from existing refuelling infrastructure in Aberdeen. The truck will start collecting waste and recycling around the city from early March and will be the first hydrogen-powered waste truck to become operational in the UK. It will initially cover wheeled bins in Garthdee, Kincorth, Bridge of Don, Newhills, Woodside/Hilton, Mastrick, Milltimber, and Rubislaw before moving to mixed recycling and bulk bins on other routes.

These journeys will not only result in estimated emissions savings of over 25kg CO2e/litre across a year, based on a diesel truck on similar routes, but will also collect data which will allow further rollouts of hydrogen-fuelled waste trucks in the future. Councillor Jenny Laing, Aberdeen City Council Leader said: “Enabling truly ‘green’ transport is a key deliverable in our plan to deliver Aberdeen’s Net Zero Vision and our own plans to replace our vehicle fleet with alternative fuelled vehicles. “Adding a waste truck powered only by hydrogen is another important step forward and builds on the zero emission buses and other public sector vehicles that are already here in the city.”

Aberdeen City Council city growth and resources convener Councillor Ryan Houghton said: “Our work has been ground-breaking and the people of Aberdeen can be proud that our city is proving to be a catalyst for demonstrating how public sector fleet can be decarbonised, setting an example for other regions in the UK and beyond. “The launch of the new waste truck comes hot on the heels of the new joint venture company with bp to deliver the Aberdeen Hydrogen Hub, and all of these projects cement our position as a pioneering, climate positive city and an important step forward in our hydrogen journey.”

The hydrogen fuel cell waste truck is one of seven which will be deployed across seven pilot sites in northwest Europe, including the Netherlands, France, Belgium and Germany. Each truck will be tested in a range of environments from rural areas to city centres, demonstrating that hydrogen waste trucks provide an effective solution to reduce emissions from road transport. The arrival of the waste truck follows a host of major hydrogen announcements by Aberdeen City Council in recent months, including the world’s first hydrogen double decker buses becoming operational, new funding secured for hydrogen projects and most recently, the appointment of international energy company, bp, as strategic commercial partner for the development of the transformative Aberdeen Hydrogen Hub.

The waste truck is being part funded by the Interreg North-West Europe Programme as part of its HECTOR project – Hydrogen Waste Collection Vehicles in North West Europe. Selected as the project’s lead partner, Aberdeen City Council will add this waste truck to its growing fleet of 85 hydrogen powered commercial vehicles, including hydrogen powered buses and public sector vehicles. Each European deployment site will aim to continue operation of the trucks after the end of the project in June 2023 and, as the vehicles are operationally proven, will gradually replace conventionally fuelled trucks.

The chassis was manufactured by Hyzon Motors, a global leader in fuel cell electric commercial mobility which provides end to end decarbonisation solutions through its industry-leading zero-emission technology. The refuse collection vehicle is being manufactured and supplied to Aberdeen City Council via Geesinknorba, one of Europe’s largest providers of innovative refuse collection vehicles and compactors. Craig Knight, Co-Founder and CEO of Hyzon Motors said: “Aberdeen is leading the UK’s transition to clean transport, and Hyzon Motors is proud to provide zero-emission solutions to realise these ambitions today. “By delivering the UK’s first hydrogen-powered waste truck, Hyzon demonstrates its intention and readiness to supply the region with fuel cell electric vehicles to further our singular mission of decarbonising global freight.”

Dave Hughes, Managing Director of Geesinknorba Limited, added: “Geesinknorba Limited is delighted to provide Aberdeen City Council with its first hydrogen powered refuse collection vehicle. “Geesinknorba is a forward-thinking manufacturer who is at the forefront of providing zero emission and carbon neutral collection solutions and like Aberdeen City Council, is passionate about reducing the impact of collection equipment and protecting the environment we all share. It is our mission to drive sustainability. We have worked closely in collaboration with Hyzon, the world-renowned hydrogen repower specialists, to provide the chassis on which we have mounted our Li-On Power Pro technology and this ensures zero carbon emissions when in daily operation which benefits the environment and the residents of Aberdeen City.” 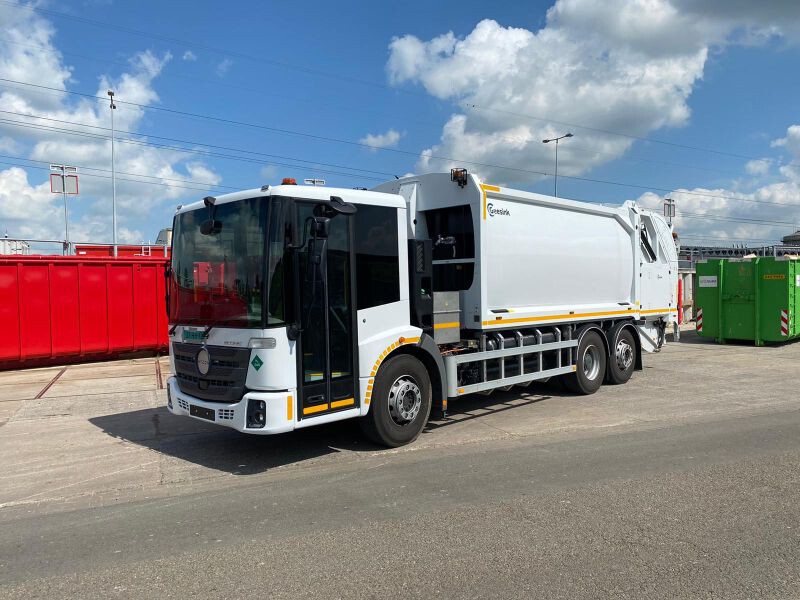 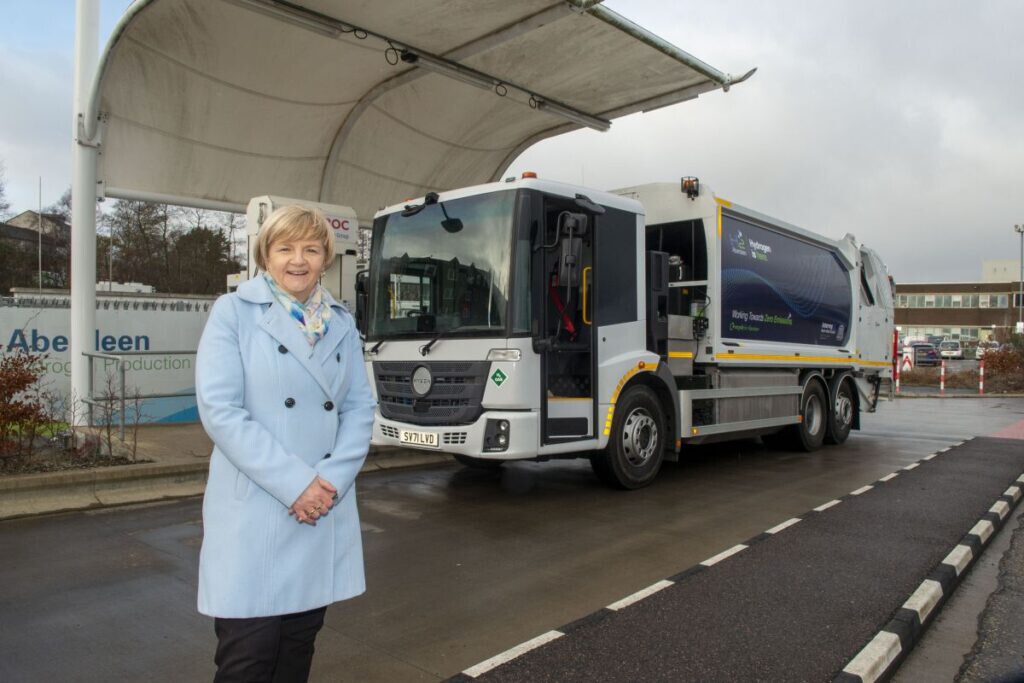