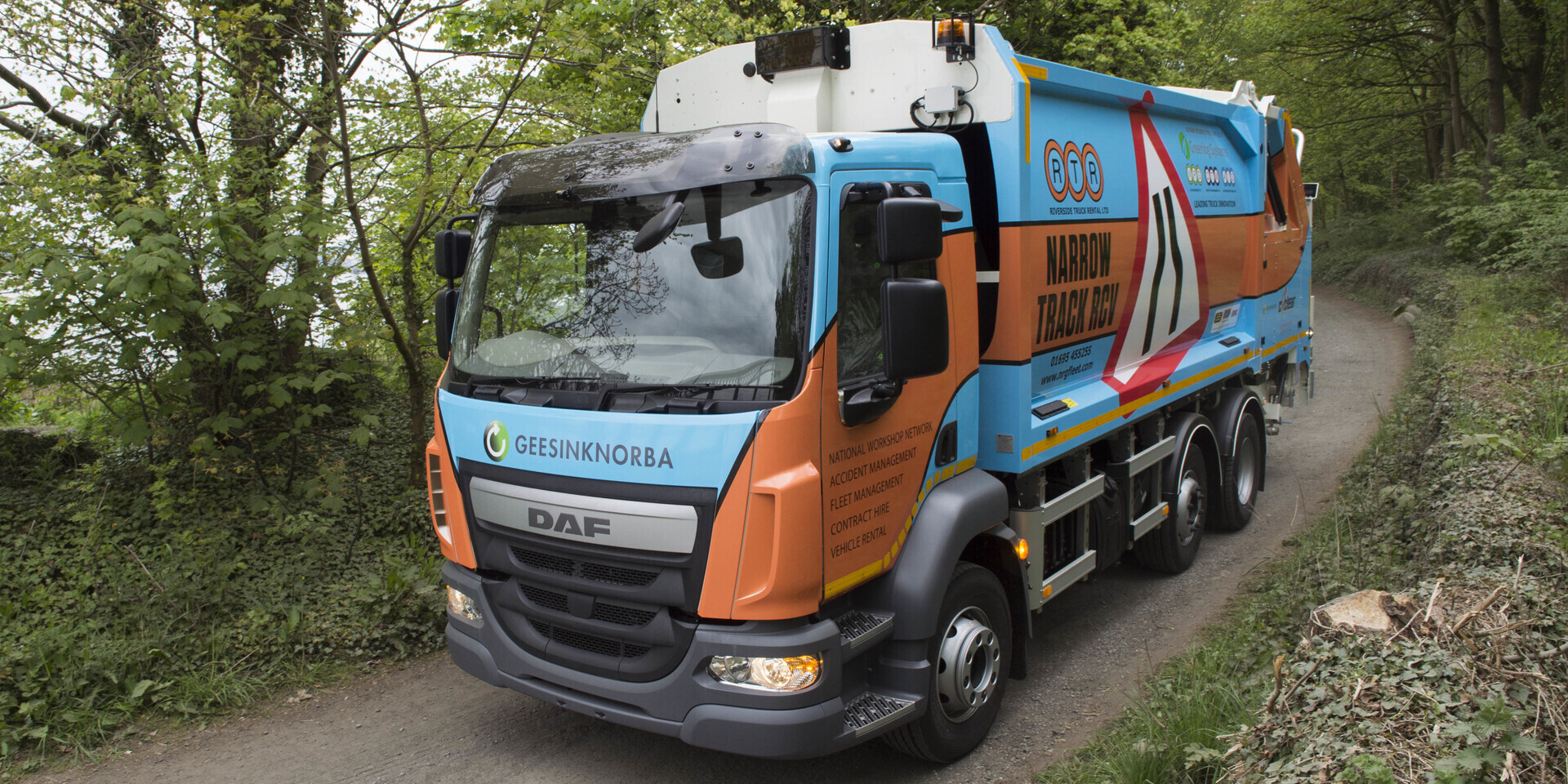 Picture this: It’s rush-hour on a cold, wet Monday morning. The heavy traffic is moving slowly through town. Queues of grim-faced commuters are growing longer at every junction. To avoid the rain, parents are driving their kids to school today – and they’re going to be late. It adds to the congestion and tension. Everyone’s in a hurry but they’re going nowhere fast.

Then, for no obvious reason, the crawling traffic grinds to a complete halt. Roadworks? An accident? A minute later, as it slowly begins to move again, you realise what the cause of the hold-up is: a bin lorry inches round the bend. To frustrated drivers, it is about as welcome as a wisdom tooth. The bin lorry stops again. It’s stuck behind a parked car. Can the oncoming traffic find room to let it pass? Will that driver let it out? Is he really going to turn right? Why didn’t you leave home earlier!

We’ve all been there. For ordinary road users it can be very frustrating. For the driver and crew it can be even more so – they have work that has to be done. And don’t even ask about the fleet manager.

But imagine if it could be different, if a refuse collection vehicle could be built that could manoeuvre in and out of traffic, negotiate its way up and down tight urban streets and hardly get in the way of other people doing the school run or the daily commute. Well, that’s what a group of industry innovators set out to build. And they think they’ve achieved their goal.

The new ‘narrow-track‘ refuse collection vehicle (RCV) has been developed through a collaboration between GeesinkNorba, the NRG Group and DAF Trucks who, between them, identified a growing niche in the UK market. 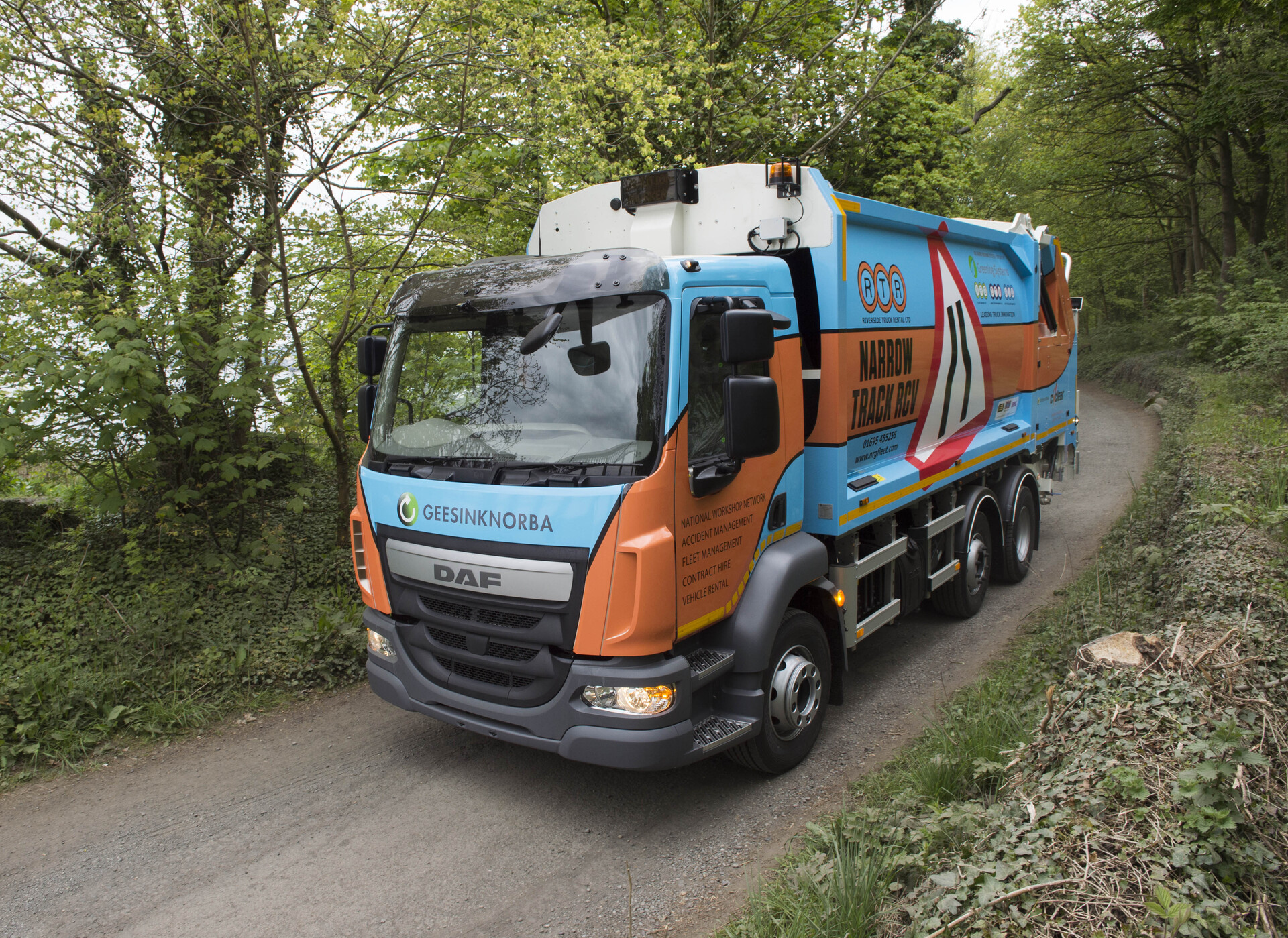 The vehicle has a Geesinknorba GPM IV narrow 17m3 body fitted with a Geesinknorba trade bin lift. This is mounted on a Daf LF 280 16 tonne chassis with an additional mid-steer axle added to give a gross vehicle weight of 22.5 tonnes.

The result is a narrow, highly manoeuvrable RCV with a payload of nearly 10 tonnes, depending on the waste stream collected. Or put another way, it combines the collection capacity of much larger vehicle with the speed on an urban round of a much smaller vehicle, moving through traffic and tight city streets with such ease it will put a smile on the face of fleet managers across the land.

Mick Hill, Geesinknorba’s UK general manager, said: ‘The idea came from conversations with Riverside Truck Rental, a part of NRG Group, who are long-established customers of ours. They saw a gap in the market for a good quality narrow-track vehicle at a fair price and talked to us about it. ‘The vehicle is built on tried-and-tested kit – we already made narrow-bodied vehicles. And the DAF chassis already had a great turning circle but when they fitted an additional mid-steer axle onto it and mounted the body and lift, the result was a very manoeuvrable vehicle with a turning circle that would beat everything else hands-down. The cab is also designed to offer very good visibility, making it ideal for tight, busy, urban streets. As a mainstream DAF vehicle it is also backed up by the excellent UK network of 140 DAF dealers for parts and service – something operators will welcome. And another key selling point is that the vehicle is very competitively priced.

‘Along with the price, of course, the operating costs will be attractive too. This has been one of the key selling points of the GPM IV body which we launched a couple of years ago and which has been very well received by the market but you can add to that the fuel economy of a vehicle that doesn’t get held up so often.‘ 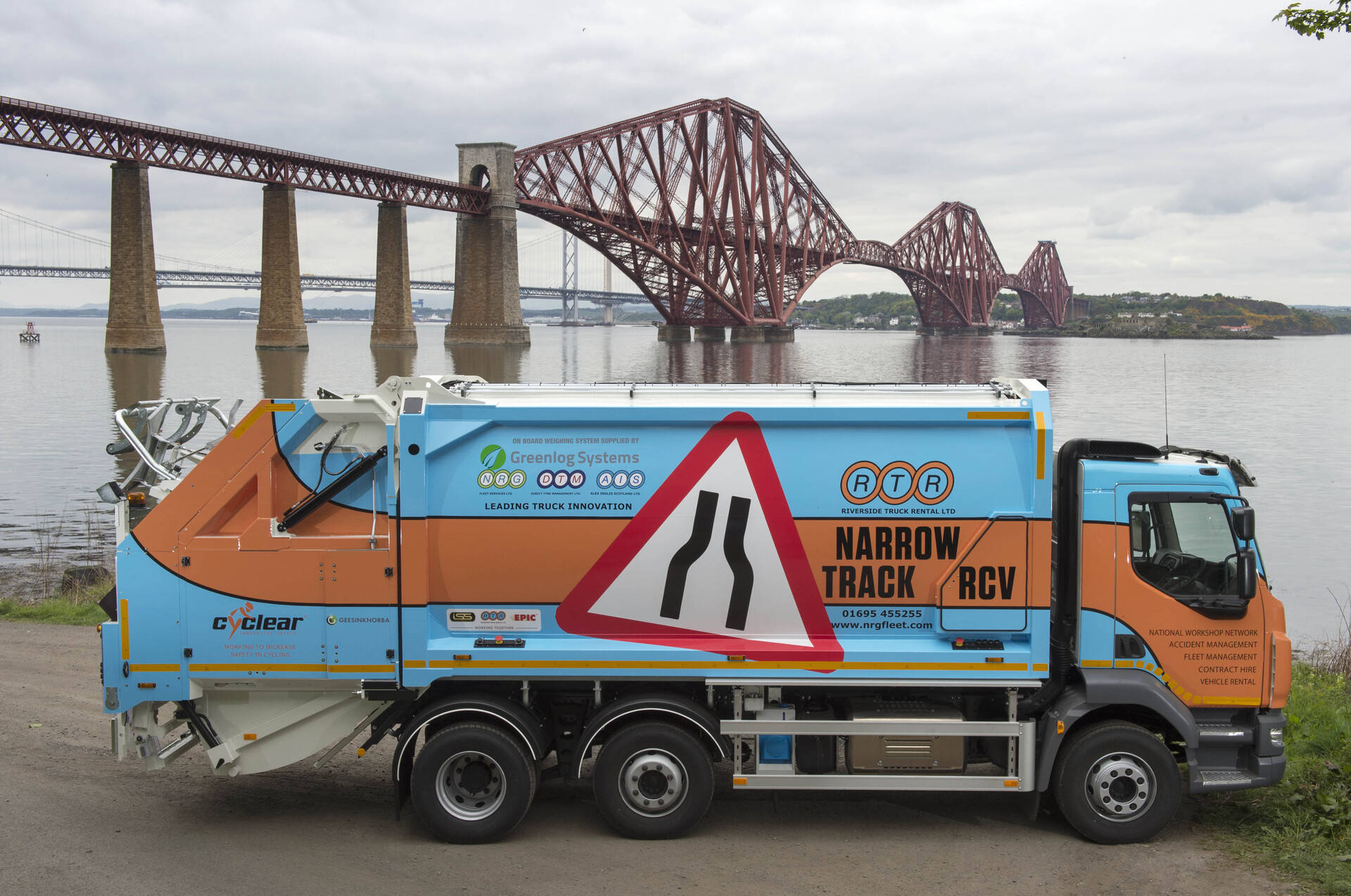 Alan Ellison, group sales director at NRG Fleet Services, said: ‘It is definitely the right time to introduce a new, compact, refuse collection vehicle. The roads are busier and more congested than ever, the public is increasingly voicing its concern and our customers are looking for solutions. ‘This new vehicle has a much narrower footprint than traditional RCVs. It has a very tight turning circle and is highly manoeuvrable which, from any operator’s point of view, means fewer hold-ups, quicker collections and greater operational efficiency. ‘And it will seem a lot friendlier to the general public as they go about their daily activities because it is less intrusive not getting in the way so much, not causing hold-ups or presenting such an obstruction for motorists and being easier to see past and overtake. Yet it is achieving the sort of payloads associated with a much bigger vehicle.‘

The first narrow-track vehicle has been built to NRG’s specifications, ensuring it is totally up to date with technological innovations to meet the latest emissions and safety needs of the industry. Alan Ellison explained that their customers would only accept the best: ‘They want new vehicles because they produce lower emissions and they could be using them in the London Low Emission Zone or – if not – in one of the other low emission zones being introduced to metropolitan areas. And they also want the Clocs (Construction Logistics and Cyclist Safety) standard vehicles too. Consequently, all our new vehicles are totally up to date.‘

Before handing the first vehicle over to NRG, it was unveiled by GeesinkNorba at the APSE show in Aviemore in May. There it received a great deal of interest which will delight its new owners as they have a considerable and growing customer base in Scotland and the north of England. Mick Hill said: ‘We’re all delighted with the way the vehicle was received and have already had serious enquiries from potential customers. They are eager to see it in action and put it to the test themselves, of course, and that is already being arranged. Visitors to Aviemore were interested in its manoeuvrability and the fact that it still has such a large payload. And the other key point that whetted their appetites was undoubtedly the cost and the fact that a quality vehicle in this class is now available at such a competitive price. ‘We’ll be taking it on to Future Fleet Forum at Stoneleigh on 29 June where I’m sure it will be just as well received. And after that we’ll be looking to show it off – or other similar vehicles – elsewhere in the UK.‘ Alan Ellison added: ‘From NRG’s perspective, this vehicle will give more choice to our existing customers. But I expect it to open channels for new customers.

‘Hopefully, they’ll hear about our role in the development of the narrow-track vehicle and that will enhance our reputation as innovators in the industry. And they’ll understand how this vehicle was born out of us listening to and understanding our customers‘ needs.‘